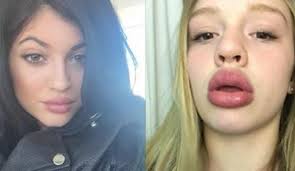 Photo from: Inquisitir under the creative Commons license.

The lip challenge is a way to recreate Kylie’s huge lips.

The Kylie Jenner Lip Challenge is something that has taken the Internet by storm and has been trending on every social media site you can think of.

Kylie’s lips are something that no one can fully understand. Are they real? Are they fake? She gets criticized everyday for how large her lips have become, and how she got them that way.

After many months of theories about Kylie’s lip transformation, the Kylie Jenner Lip Challenge arose. This challenge has the participant stick a shot glass to their lips and suck in air, and leave it there for as long as they can. The tutorial can be found here.

The challenge makes your lips swell and have that “Kylie Jenner” effect to them. For many, though, the challenge does not work the way they expected. Many have been experiencing difficulties when it comes to ripping the glass off of their mouths. The most common issue of the challenge is the bruising. Most of the people that take part in this new challenge get bruising all around their lips. It looks like a purple circle the size of a shot glass all around their lips. Lastly, the scariest and most severe problem people are experiencing with the Kylie Jenner Lip Challenge is severe cuts. Some have tried this with glass shot glasses and have put so much pressure in the glass that it caused it to explode and slice their face open.

The effects this challenge has on your lips last for about 30 minutes to two hours. The bruising can last for several days, and the cuts you can get get can leave a scar forever.

Many students have a strong opinion on this challenge, especially Bekah Zufelt, a sophomore here at Lake City. When I asked Bekah what she thought about this challenge she had a lot to say. She replied with, “I don’t really get why its such a big deal on Twitter, yeah, some are the videos of people doing it are funny, but I don’t get why everybody keeps trying it. There’s too many bad things that can happen if you try it. I just don’t think that it is worth it.” I believe that many students would agree with Bekah’s opinion.

Hopefully, this challenge is just like any other challenge that has trended on social media before and blows over in a couple of weeks, like the Cinnamon Challenge, in which the participant was supposed to eat a spoonful of cinnamon, which usually led to a cinnamon cloud flying out of his or her mouth as he or she coughed and choked. Another challenge was the ALS Ice Bucket Challenge, where participants would pour a bucket of ice over their heads to raise awareness for ALS. I predict that this lip challenge will soon be forgotten, and something else will take over the Internet for a few weeks. 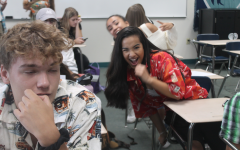