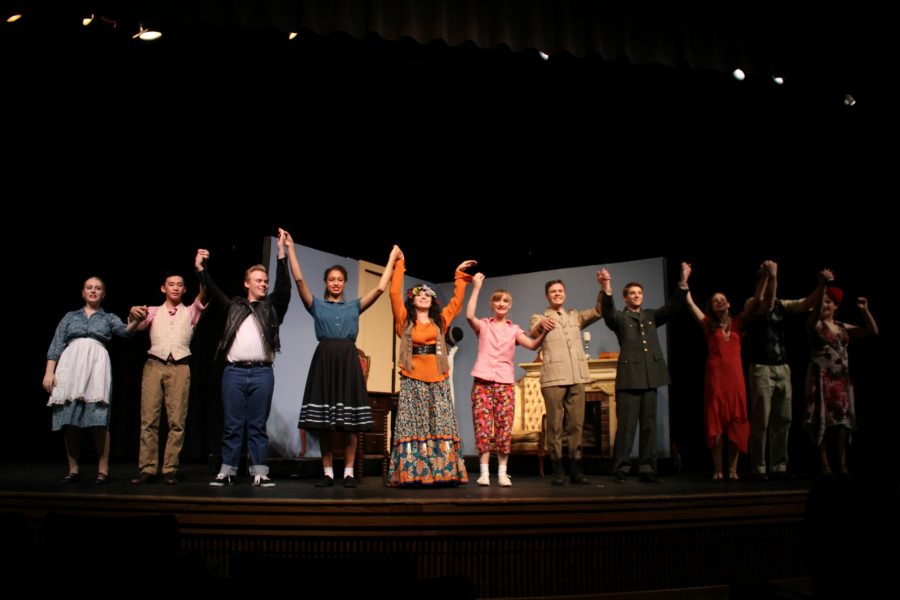 This is what our school’s fall play, Mutually Assured Destruction, consisted of. The shows were Thursday through Saturday at 7 PM, with a great turn out at each. The proud performers were Evan Schwaab, Katy Gribbin, Noah Garrett, Kyto Katori, Cidney Perkins, Marisa Butler, Sebastian Goetz, Aubrey Bernard, Noah Coll, Zuriah Irwin, and Cheyenne Miller

Mutually Assured Destruction is a play of sibling rivalries throughout the centuries, from the 1920’s to present day conflicts.

Scene one was very modern being from 2015, starting with Julian (Evan Schwaab) playing video games, when his sister, Tara (Katy Gribben), stormed in and started an argument. The arguing went on until the cell phones were involved, where they used social media to destroy each other. By the end of the scene, they had exchanged Twitter passwords, agreeing to have a “Mutually Assured Destruction”.

When we got to scene two, it was very obvious the time was around the 2002, with Joe (Noah Garret) checking into his MySpace account. Suddenly, his brother Sam (Kyto Katori) burst into the room, dressed as a clown. This caused his brother to absolutely explode with laughter. After asking why, Sam went on to explain everything, then ranted about his life. Soon, he got to the point that he “had no dreams”. They continued arguing until they eventually made up.

As for scene three, it was two sisters, Megan (Cidney Perkins) and April (Marisa Butler) in 1993. Megan was trying to write an essay on what inspires her for her application to a college, and her sister found a very rough draft of it. After a wild chase to retrieve the paper, Megan broke down and they found her true motivation- not failing, not working at McDonald’s and then getting married to the manager- so on and so forth.

Scene four was an act of Chad (Sebastian Goetz) and Rachel (Aubrey Bernard) fighting over the reason for their parents divorce in 1985. They blatantly called each other out over ridiculous reasons that they thought that the other had caused the split up. They eventually came to the conclusion that they would promise to be better children if they stay together, or- best of all- promised that they would be even worse if their parents went through with the divorce.

Scene five consisted of brother and sister Tim (Noah Coll) and Carol (Zuriah Irwin) arguing over the fact that Tim wouldn’t take Carol to watch the new Star Wars film. It was 1977, and Carol wanted to dress up, but her brother refused to take her if she did. She eventually threatened him with the pictures she had of the parties he threw when their parents were out of town. This quickly got through to Tim , and he went to find his keys, but to no avail. Turns out they were locked in his beloved car. His sister wouldn’t let him off that easy, though. She went and broke the window, and then- through  protests- they went to the movie.

Scene six was a bit strange, but in the end was very sweet, taking place in 1968. Jessica (Cidney Perkins) had moved away from her parents’ home, and came back when they were gone to see her sister Andrea (Katy Gribben) and get some essentials. Upon seeing her sister, Andrea immediately gave her a very big hug. They discussed life, and leaving but  refused to. In the end, she got her sister to stay with them.

Scene seven was a major throwback to last years production of “Grease”. It was placed in 1955, with Richard (Evan Schwaab) trying to fix his hair in the reflection of a pan. When Mary (Marisa Butler), his sister, walked in, she cracked up and left the room, only to come back in to find out what he was doing. When asked, he replied that he wanted to study with a very attractive senior. She immediately tried to tear his hopes down, and when this didn’t work she agreed to help him. When helping, Mary pretended to be the desired senior and each time rejected Richard. He finally got it through his head that it would never happen, afterwards asking for help with getting a different girl.

Scene eight was between two brothers, Charlie (Noah Garrett) and Jimmy (Sebastian Goetz), who were getting ready to leave for the army in 1944. Charlie had wrote a very extensive letter to their mother, while Jimmy had only wrote a little note. They fought over the letter, Jimmy wanting to sign his name on the letter. They got a bit physical with it, and eventually Charlie let Jimmy sign the letter. Afterwards, they left their home and were off.

In scene nine, Johnny (Kyto Katori) was very worried about his sister Maggie (Aubrey Bernard) because she was late getting home from her job of cleaning a very wealthy man’s house in 1936. When she finally got home, she had quite the story to tell. To start it off, there was a movie being filmed at the home, so Maggie was “cleaning pretty”. After a little while the stuck up actress threw a tantrum, eventually getting fired and the very famous director said he could even cast “the maid”. She immediately agreed to take the actresses place, then telling of how she had kissed a very famous and handsome actor. When she went to call, the actress answered, and even though she was upset, Maggie and Johnny were just too excited and ended up dancing to celebrate.

For the final scene that takes place in 1922, Evelyn (Zuriah Irwin) is getting married. When her sister Virginia (Cheyenne Miller) brings this up, Evelyn goes off on a rant about how she does not want to get married. She went on to tell of her plan to get out of the marriage, a very ridiculous one at that. She would fake her death and run off to New York City. Virginia did not agree with this, and when asked to practice what she would say she went wild, making up many ridiculous ideas about it. After Evelyn got a bit upset, they made up and started making plans for her “funeral”.

All in all, this was an amazing performance put on by the drama department and was definitely entertaining to whoever went to see it. Congratulations to all of the amazing actors and actresses, and hopefully there are many more great shows to come!